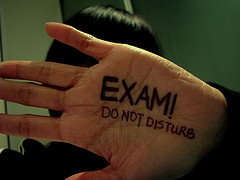 PMP Credential aspirants have to be very careful while attempting exam questions. To do 200 questions in 4 hours translates to about 80 seconds per question. This may not be enough to read each question and its 4 choices carefully.

There are some tips that help you to lookout for the main keywords, and some qualifiers that can change the meaning of the question. This is so common on the PMP Exam that you need to be careful about it, and practice understading such questions

Look for key words and phrases in the question, as they often change the meaning of the question. Some keyword qualifier are listed below:

For Example:
Q: The next milestone date is just 2 weeks away. The project is within budget, but behind schedule. You are worried whether you will be able to meet the timeline in 2 weeks time. While passing down the hallway, you overhear 3 teammates having a heated debate about a design issue on the fan motor of your airconditioner project. The least likely method of resolving conflicts on a project is:

Double Negative Questions in PMP Exam
Another thing to be careful about is the double negatives in the questions. There are not too many of such questions, but you must practice understanding these questions, as you don’t want to waste valuable time trying to interpret. See some examples below, which have been simplified for you.

1. All of the following are True Except:
This is asking you which one of them is FALSE

2. All of the following are False Except:
This is asking which of the options is True.

So look out for such qualifiers, and make yourself familiar with how using each can alter the meaning of the question. This will save you some time and anxiety on the PMP Exam day.

All the best for your exam preparation!

Just fill in your details here: